John Podesta and a group of Democrats called for Rep. Steve Scalise to resign shortly after he began his efforts to combat human trafficking as the Majority Whip of the House. On Jan. 8, 2015, John Podesta received an e-mail from Democrat-run group House Majority PAC campaigning for Scalise to resign, according to an e-mail by Wikileaks. The subject of the e-mail was “add your name: tell Scalise to resign” and called for Scalise to step down as GOP Majority Whip. The e-mail stated that their reason behind the petition to remove Scalise was due to the fact that he had spoken at a rally sponsored by David Duke 13 years earlier.

The signature-drive by Podesta and other Democrats calling for Scalise to resign began at the same time Scalise started working on legislation as the Majority Whip in the House to end human trafficking. Scalise and other Republicans had been working on several bills that took aim at human trafficking. On Jan. 27, 12 of those bills passed in the Republican-controlled House. Scalise gave a press conference at the Capitol about those bills on the same day they were passed. 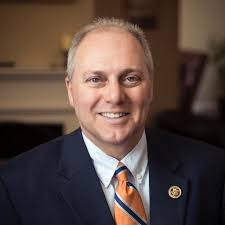 Ironically, the House Majority PAC & Podesta petitioned for Scalise to resign via e-mail the same day in January of 2015 that the Senate introduced a bill to end sex trafficking titled the Combat Human Trafficking Act authored by Senators Rob Portman and Dianne Feinstein, according to Time.

On May 19, 2015, the House gave final congressional approval to legislation to expand law enforcement efforts and help victims of human trafficking. “One of the great American values we share is our strong belief in the inherent worth of each and every human life,” Scalise said at the time. “Human trafficking is a direct assault against that core value, and it affects millions of victims who need our help — including right here in America. Congress must continue to do everything in our power to combat this scourge and provide protections, and ultimately justice to the victims of human trafficking.” As previously reported by The Hagmann Report, Scalise was working on new human trafficking legislation when James Hodgkinson allegedly shot him as he practiced baseball in Alexandria, Virginia on June 13.

In 2011, Andrew Breitbart famously linked Podesta to underage sex trafficking in a tweet: Members of the House Intelligence Committee are set to interview Podesta this week into alleged Russian meddling in the 2016 election.

Liz Crokin is an award winning investigative journalist, author of Malice and regular contributor to the Hagmann and Hagmann Report.