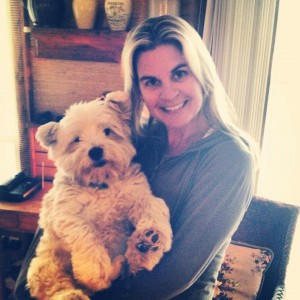 My best friend is a loyal West Highland Terrier named Oscar. When my parents first brought him to the high-rise condo in Chicago where I lived at the time — it was love at first sight. However, I never could’ve predicted that my furry friend would play such a pivotal role in my healing process as I recovered from the life-threatening disease I later developed from the STD my ex-boyfriend infected me with. My dog has had a better understanding of my illness than anyone including my own treating physicians. I’ve experienced a medical miracle during my recovery that I truly believe Oscar is responsible for. He saved my life.

When doctors diagnosed me with meningitis at Cedars-Sinai Hospital in Los Angeles on October 8, 2012, I had little comprehension of the seriousness of my illness. (Tests later proved that I had herpes-meningits and it progressed to meningoencephalitis.) My failure to understand my grave situation partially had to do with the fact that my brain was so swollen that it was difficult for me to process information. After my ER doctors received the positive test results for meningitis from the painful spinal tap they administered on me, everyone in the hospital seemed to panic except me. The hospital staff members quickly threw medical masks on and immediately quarantined me. As the chaos ensued, I sat in my hospital bed and thought it would be hilarious to post a photo of my friend and I wearing medical masks on FaceBook. I also came up with the brilliant idea to call my hair salon to make a hair appointment to get a Brazilian blowout as I was hooked up to an IV from my hospital bed. When you’re staring death in the eye, posting funny photos on social media and making hair appointments should not be a priority. I was out of my mind.

END_OF_DOCUMENT_TOKEN_TO_BE_REPLACED Before I met my ex-boyfriend, I was living a fabulous Hollywood life. I was single, healthy, happy, attended red carpet parties and I had developed a successful six-figure career as a senior editor for an entertainment magazine. I began dating my ex-boyfriend in the spring of 2012 and after six months he completely destroyed the life I had worked so hard to build. On October 8, 2012, I was diagnosed with viral meningitis. My doctors were at a loss to explain how I could’ve contracted the disease. Although my initial test results were negative, my doctors knew there was a chance the meningitis could’ve been induced by an STD that I wasn’t testing positive for yet. It turned out that the cause of my meningitis stemmed from genital herpes that my ex exposed and infected me with. Since he lied to all my doctors and I about his condition, his deceit delayed and obstructed my treatment. This caused the hsv2-meningitis to progress to the potentially fatal meningoencephalitis and left me with brain damage. I’m pursuing civil and criminal charges against my ex, you can read more about my cases here.

The disease left me unable to care for myself and bedridden at my parents’ home in Chicago for weeks. My brain damage handicapped my reading, writing, memory, vision and left me with dozens of various ongoing health problems. As you can imagine, this is highly problematic for a writer. I lost my full-time job because I was unable to work. I later lost my gig as a weekly columnist for a Chicago publication the day my lawsuit went public. My boss called me up and told me the paper “doesn’t want to be associated with herpes”. She told me if I did any interviews about my case, I wasn’t allowed to say publicly that I currently worked for the publication even though I had already filed my next few columns scheduled to run the upcoming Sundays. I didn’t feel comfortable lying about my relationship with the company so I resigned immediately.

On top of that, when I got ill I had recently switched full-time jobs. My old insurance had just ended and I hadn’t gotten new insurance yet. I found myself jobless, disabled, with no insurance and I had medical bills mounting to six-figures. I felt lost, totally helpless and even contemplated taking my life. I was deep in the valley of the shadow of death without a clue how to get out. END_OF_DOCUMENT_TOKEN_TO_BE_REPLACED